The struggles of the dying gull were sad to see. Borne helplessly towards the shore by a gentle breeze and the flowing motion of the water, it drifted, wings outstretched, head hanging limply backwards, beak open.  Now and again it made a desperate attempt to flutter its limp wings but the effort was beyond it.
It floated almost lifeless, rising and falling with the gentle swells, eyes closed, waiting, waiting for the peace of death to claim it and take it back to where it belonged – back to the great unknown.
I sensed a resignation about the gull, a subdued acceptance of the inevitable as if the force drawing it away from the world it knew was too powerful to be resisted.
With the patience engendered by the Eternal it awaited the end while its brother and sister gulls wheeled above or floated nearby, slightly agitated, knowing in the way that birds do that death was at hand.
The universal, knowing no death but only Eternal life enfolded the feeble gull into its all-embracing silence, absorbing it deep into the being from whence it first arose with wings of joy, eager to be active.  It lived fully as a bird does, sharing with its kind the feel of sun and wind, the sight of wave following wave, floating on the crests or flying high, wheeling and turning, diving arrow-like into the water, rising with a fish in its beak.
Surely life has consequence even for a bird if it has tasted all this even for only 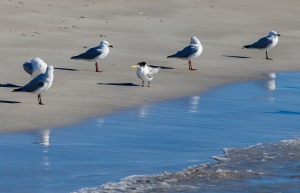 a short time. Is there need for deep sadness at its going?  Nature prepared all for it, fashioned its wings, its body, supplied the seafood it hunted, air to fly in, the sea to rest on and the seashore to forage along.  That which has given so much surely cannot be condemned for taking it all back if that is the way things are.
So, my children, put away your sadness.  The gull has gone but others remain to delight us with their ways. All things are lonely in death if one gazes only on the outer face of nature’s handiwork but to those who are blessed with awareness of her inner being there is the conviction of a deep togetherness even in death.
(Written after our young children were distressed at the sight of a gull dying slowly on an almost placid river.  It was too far out to retrieve so we had to let it be.)

One thought on “A Gull Returns to the Silence”